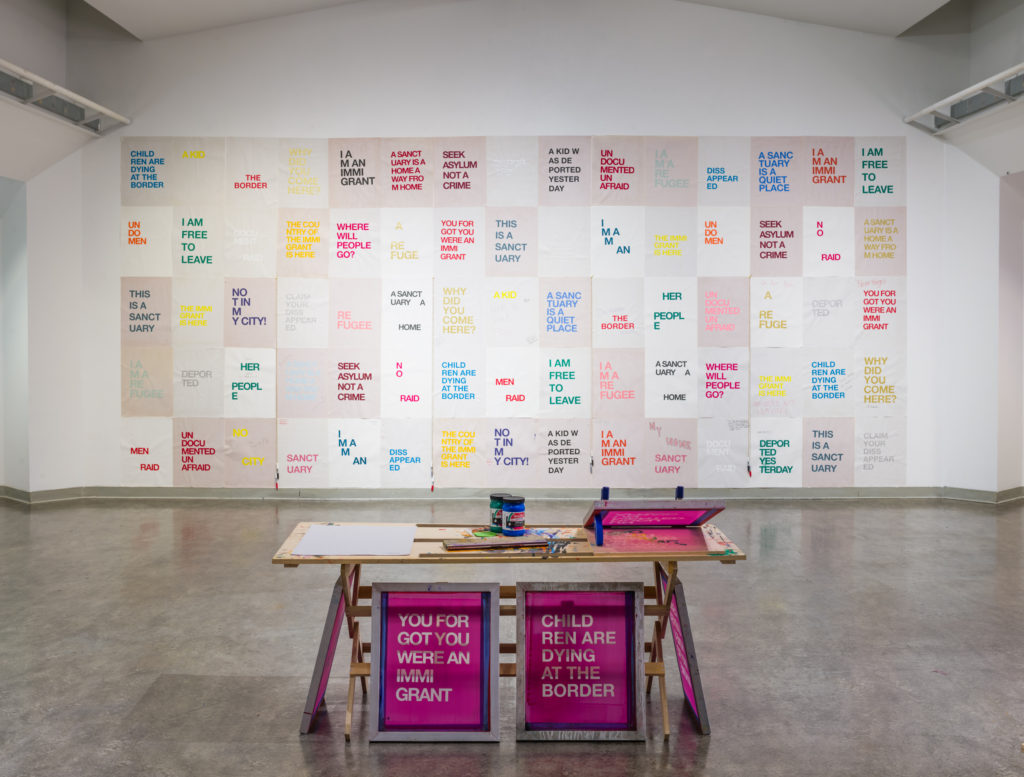 The Sanctuary Print Shop bridges art and community: it is both a functioning print shop and an open space for engaging questions about immigrant rights. Visitors are invited to not simply take in the exhibition– comprised of prints, timelines and videos about sanctuary cities and immigration ordinances in the US– but to directly participate in silkscreen workshops and printmaking events, community conversations, and other public interventions held over the course of five months. In the tradition of printmaking for social justice, Sanctuary Print Shop: Seattle uses art and design as catalysts for shaping the future. All are welcome here.

Sanctuary Print Shop: Seattle builds upon The Sanctuary City Project’s exhibitions in venues including The San Francisco Museum of Modern Art; Yerba Buena Center for the Arts; The Anchorage Museum’s SEED Lab Project; and The Museum of Contemporary Art, San Diego. The Seattle print shop is curated by Thea Quiray Tagle and produced by Molly Mac. 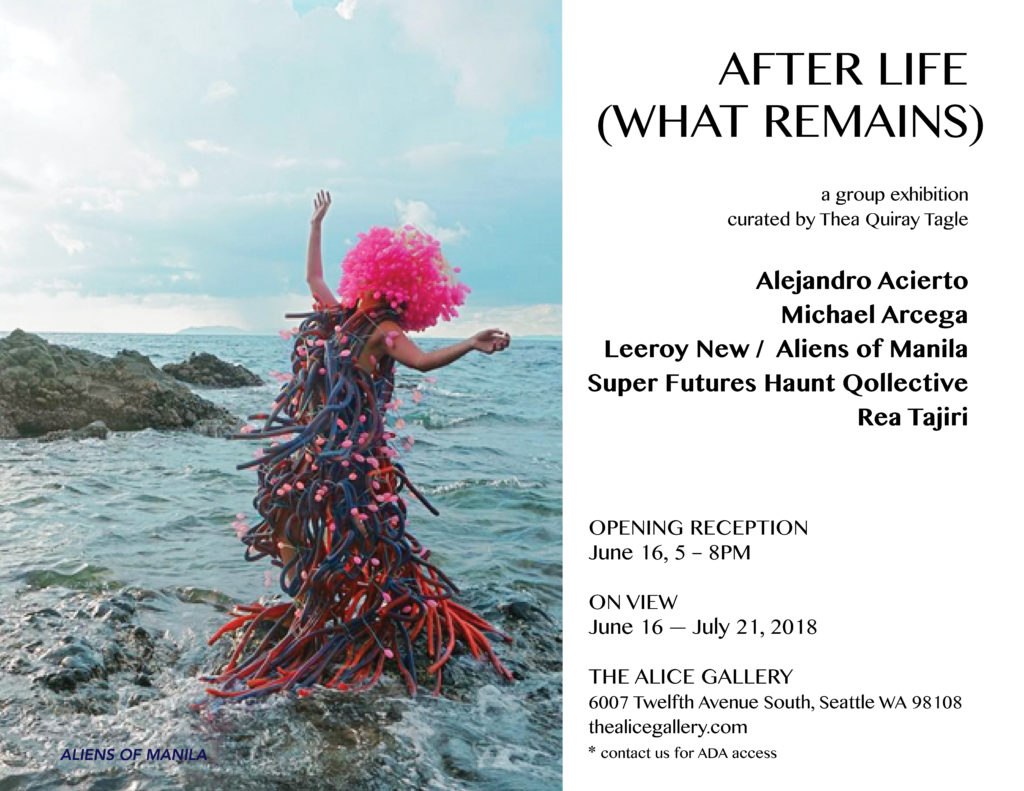 AFTER LIFE (what remains)

AFTER LIFE (what remains) is a multi-genre visual art and performance exhibition that stages a conversation between Asian Pacific American and Indigenous artists around the questions: what new strategies are needed to survive after environmental catastrophe and military intervention, by communities facing displacement and dispossession? How can speculation, humor, and fantasy fuel larger movements for social change around the Pacific Rim—from the Pacific Northwest, to California, to Southeast and East Asia—and in the heartland of the USA?

AFTER LIFE (what remains) is funded in part by a grant from 4Culture, with additional support from UW Bothell School of Interdisciplinary Arts & Sciences

Read the curatorial essay for AFTER LIFE here

News, reviews of AFTER LIFE (what remains):

Queer Value is a two-person show that challenges us to reconsider the worth we place on subaltern spaces, places, and bodies. Zulfikar Ali Bhutto / Faluda Islam and Azin Seraj, queer diasporic artists in the US, redefine the paper arts in their respective projects Mussalmaan Musclemen and Concurrency: Foreign Exchange. Together, these artists joyfully and powerfully fabricate new spaces of desire, liberation, and belonging. 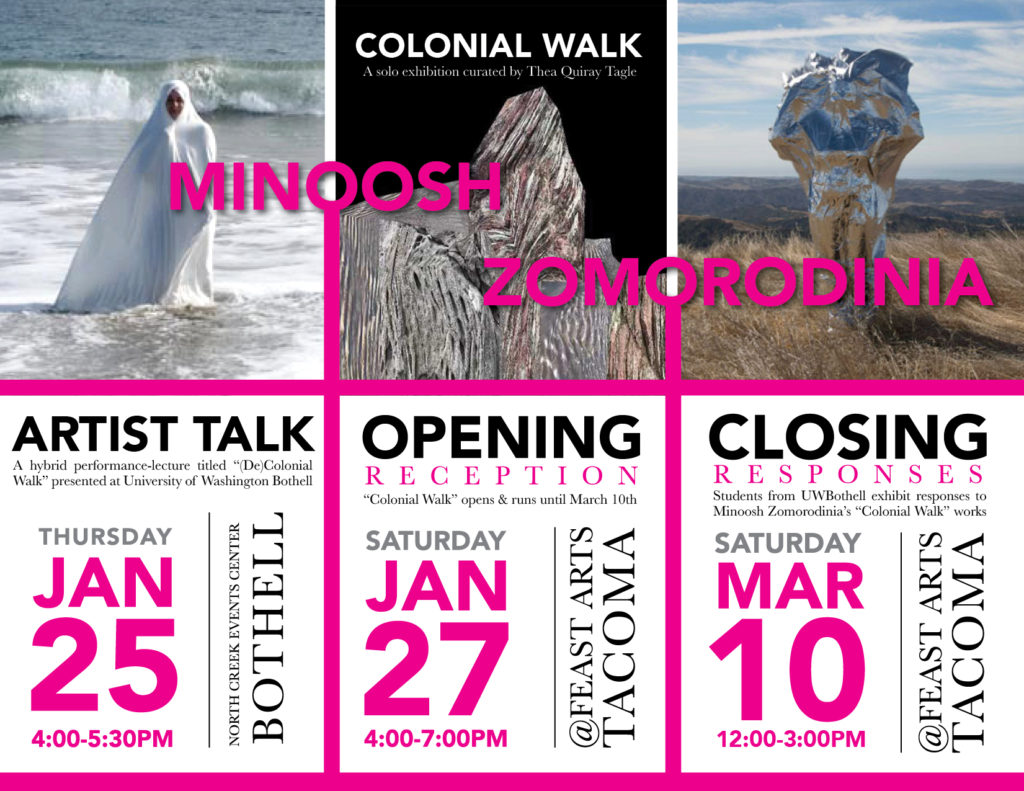 Minoosh Zomorodinia is a San Francisco Bay Area-based interdisciplinary artist and educator of Iranian Muslim descent. She holds an MFA from San Francisco Art Institute, and has received awards including the Tosa Award (finalist), the Djerassi Resident Artist Fellowship, and the SFAI MFA Fellowship. She is currently an affiliate artist at the Headlands Center for the Arts, and her work has been exhibited nationally and internationally in Canada, England, Finland, Iran, Mexico, Romania, and South Korea. Colonial Walk marks Zomorodinia’s Pacific Northwest debut.

Colonial Walk is a new project-in-process by Minoosh Zomorodinia that extends the artist’s prior investigations into the relationship between the self and the natural environment. Meditating on the ways immigrants can or cannot make home in the United States, Zomordinia takes dérives (or psychogeographic walks) through nature, mapping her routes with geographical information systems (GIS) software and other programs. The videos taken along her routes are then reconstructed intro abstract pathways, and are projected onto larger sculptural forms— creating an ephemeral map of an impossible landscape of Zomorodinia’s imagination. Visitors passing through the gallery alter the maps through their movements, and in doing so further challenge notions of ownership— our ownership of technology and of the land itself.

From mid-February through the show’s closing on March 10, a series of creative responses to Colonial Walk will be featured in the gallery alongside the project. These responses will be produced by UW Bothell students enrolled in Thea Quiray Tagle and Anida Yoeu Ali’s co-taught course on socially engaged arts practice.

Opening Night Reception with the artist: Saturday, January 27 from 4—7PM